The fantastic imagery created by the American photographer William Schmidt Jr. mobilizes the spectator’s view. It reveals itself before the eye like a kaleidoscope of thousands and thousands of harmoniously coordinated color corpuscles.

Often starting with detailed photos from architecture and nature, Schmidt develops complex and complicated patterns and mirror images, generating new forms and geometrical structures from abstraction. Schmidt plays skillfully with the medium of optical illusion. His artwork seems to be in constant movement. Circular shapes rotate like spinning tops. It gives viewers the feeling of submerging in a labyrinth of different levels and heights. The elements become revolving spheres consisting of fire, water, air, and earth. Cubes stretch, lengthen and bend. They seem to disappear into a maze of steps. Molecule-like constructions expand into the third dimension. Physical boundaries dissapear—a reminiscence of M.C. Escher’s ingenious figments of imagination, transferred to an entirely individual and creative universe and breathtaking color spectrum.

William Schmidt’s images appear like fields of power full of self-dynamics, there’s something meditative about them. They stimulate the imagination and set free lines of thoughts. Similar to picture puzzles, what you see depends on the viewer’s perspective. According to perspective and angle, different motives emerge from the general view. Schmidt has found a highly personal style within the labyrinth of digital photo art, blurring the boundaries between painting and photography through his œuvre. The photo artist calls his works “Dreamed Images “, and actually, he opens the gates to our subconscious through them. Beyond any religious classification, Schmidt creates his version of mandalas, liberating images that open our eyes to the concealed. With his light boxes, designed for the first time for his exhibition at “Image Gallery” in Berlin, he makes even a step further. He adds a special three-dimensionality and radiation intensity to his works through which he transfers the fascination of laterna magica effects to the 21st century. 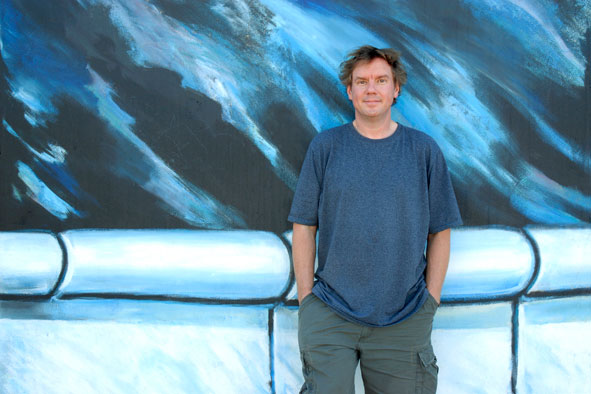